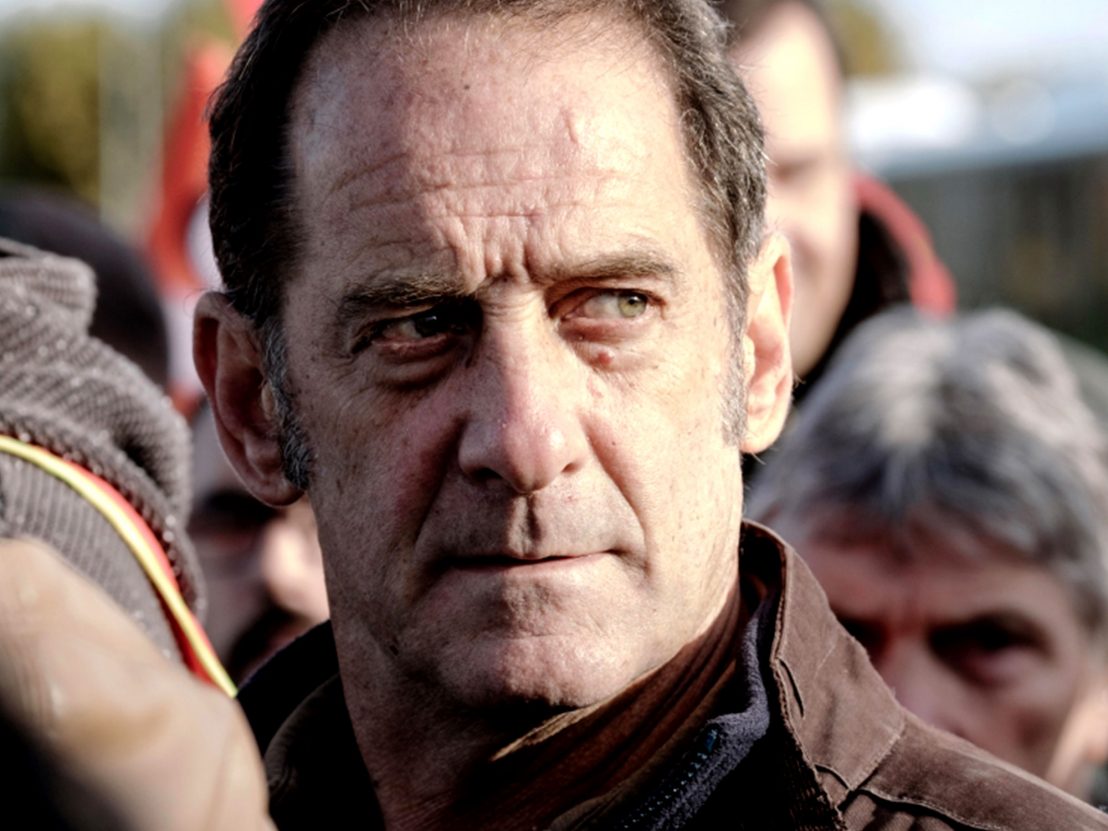 Cannes darling Stephane Brizé returns with a trudging, cacophonous insight into the guts of industrial activism.

A middle-aged worker reads out one of many letters sent to the employees of Perrin industries: “From all of us in Sunderland to all of you in Agen.” International solidarity comes through for the 1100 French people working in the automotive parts plant which has been ordered to close. Solidarity doesn’t pay the bills, though.

In At War, Cannes darling Stephane Brizé returns to the main competition with a trudging, cacophonous insight into the guts of industrial activism (or lack thereof). It’s a topic the French know all too well. Vincent Lindon is the only professional actor in the film, leading a mostly seamless ensemble of fighting workers, demanding their already-agreed rights from a quietly complacent management body. Thus ensues the eponymous war; a gruelling back-and-forth of endless conversations, arguments, outcries.

Reconstructed and sufficiently convincing TV news reports frame the intrigue, as it begins in media res – employees aren’t happy, bosses aren’t seen, few people are being heard. In private conversations too, the pace is relentless, capturing the simultaneous desperation and necessity to keep moving even if it’s to go round in circles.

Brizé has previously won three César awards (including one for Mademoiselle Chambon in 2009), but no Palme d’Or as of yet. Lindon is no stranger to the festival himself, having picked up the award for Best Actor in 2015 in Brizé’s own The Measure of a Man. Their latest collaboration could channel these past successes to win over this year’s Jury – if only At War was just a bit more galvanising.

There is a bluntness to the striking workers’ violence which anchors the film as an episodic event. From a private meeting to a heated boardroom argument, the length of each new conversation is tangible as it reaches its climax and then fizzles out. Brizé’s camera is clinical in its style but mobile enough to infuse a great sense of cinéma vérité to a story that’s almost too transparent to mask as pure fiction.

Care is given to an atmosphere clearly enhanced by aesthetic tropes though. A slightly dissonant score adds gravitas to cutaway scenes while leaders and fighters catch their breath, and it’s hard to believe the passionate performances were only mastered in 23 days on set. However, a (melo)dramatic ending leaves a bitter taste and threatens to ruin the credibility At War had earned until this point. Things don’t always get better, but does that mean we have to go to such lengths ourselves to make them even worse?