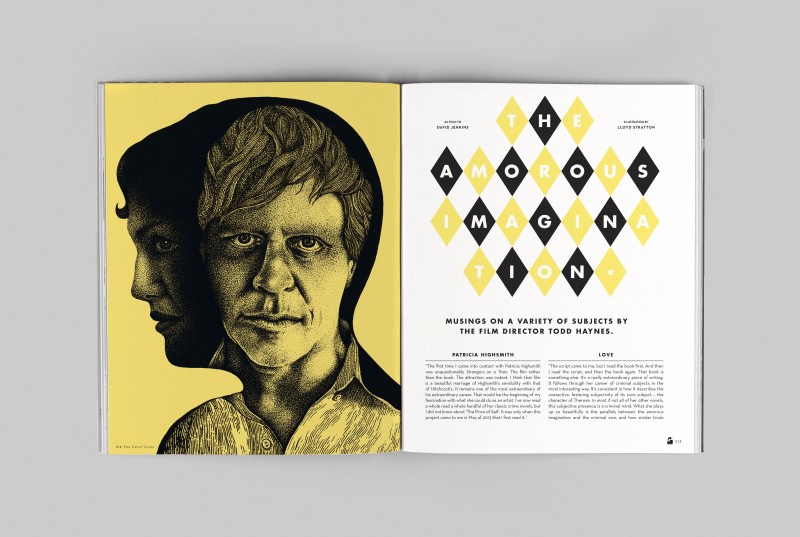 To borrow a lyric from The Charlatans, love is the key to the new issue of Little White Lies – inspired by and dedicated to the film Carol from director Todd Haynes. In this masterful, heart-crushing work, Cate Blanchett and Rooney Mara play a pair of romantically idle women in ’50s New York who meet cute in a department store and gradually, inexorably converge as one. As a piece of craft, the film is untouchable, with cinematographer Ed Lachman and composer Carter Burwell both very much on their A-game.

LWLies’ artistic director Timba Smits created the cover, and this is how he approached it: “My inspiration for the Carol cover was to look at midcentury fashions and 1950s Vogue covers and evoke the beautiful hand illustrated portraits (almost photographic) style of the time. I also looked to classic photos/portraits of Audrey Hepburn, who Mara reminded me of throughout the film, and used these for pose and style reference. It’s actually a hybrid ‘Rooney Hepburn’.”

The Amorous Imagination
We talk to the director of Carol about how, in the words of Leonard Cohen, there ain’t no cure for love.

Surface Tensions
Is it possible to locate a homoerotic subtext in just about any movie? LWLies investigates.

The Love Parade
When we say “I love you”, what does it actually mean? Matt Thrift compiles some of cinema’s most dazzling and ambiguous uses of this important phrase.

The Opposite Of Everything
João Ferreira, creative director of Queer Lisboa Film Festival, offers a definition of modern queer cinema.

Cheat Sheet #2: 100 Queer Classics
One hundred classic LGBT and queer-themed movies which you simply must see.

Strip Club
Nick Pinkerton offers a history of newspaper comic strips on film ahead of the release of The Peanuts Movie.

All that and interviews with Terence Davies, Saoirse Ronan, Pete Sohn and Gaspar Noé, special reports from the Venice and Toronto film festivals, Jacques Gites reports from the set of Return of the Jedi, and Ex-Rent Hell explores the economic imbalance of Tom Cruise in Cocktail.

LWLies 62 hits newsstands Saturday 7 November and is available to pre-order now from our online shop.