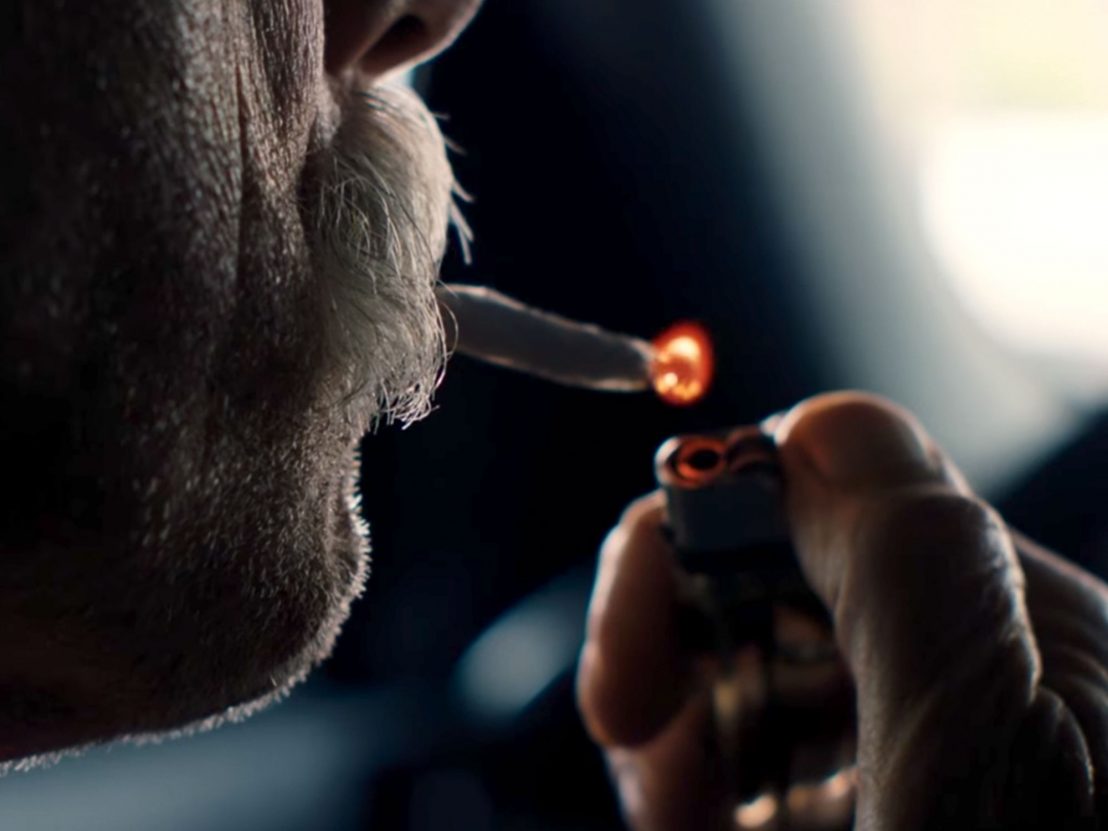 Stoner movies have been a popular sub-genre ever since the hazy halcyon days of Cheech and Chong, but rarely are these films marketed in way that allows explicit references to drug use. That’s largely down to restrictions enforced by the MPAA, which deems trailers suitable for “all audiences” only if they adhere to its strict ratings guidelines. But given that one in eight adult Americans say they use cannabis (according to a 2016 survey), film companies are starting to devise alternative marketing strategies.

In The Hero, veteran Hollywood actor Sam Elliott plays an ageing movie star who goes on a soul searching journey after being diagnosed with cancer. It’s a tender indie drama about coming to terms with your own mortality, with the weighty subject matter offset by Brett Haley and Marc Basch’s warm, good-humoured script.

Much of the film’s lightness comes from Elliott and co-star Nick Offerman smoking a tonne of weed while reminiscing about the good old days. You wouldn’t know this from watching the official trailer though, as any suggestion of such activity has been completely obscured presumably to keep the film’s appeal as broad as possible.

Curiously, there is a second trailer aimed specifically at marijuana users, whom US distributor The Orchard have identified as a key target demographic. To our knowledge, this is the first instance of a movie trailer being cut with stoners in mind. To better understand the thinking behind this marketing tactic, we spoke to David Wilfert, who works to bridge the marketing gap between mainstream movie culture and cannabis. Here’s what he had to say about the The Hero’s aim to connect with pot-smoking viewers.

“Familiar with the previous work my agency had done marketing films in the marijuana space, The Orchard approached TWBE to come up with something cool for The Hero. They knew they had this great film, with awesome stars and some pot smoking, but the demographic they were focused on skewed a bit older and more conservative. They wanted a trailer that could capitalise on the film’s stoner tendencies.

“To me, The Hero is a stoner dramedy with mainstream potential. I’m always on the lookout for new, innovative avenues to reach eyeballs, and had previously found a company that had installed TV sets in marijuana dispensaries and pot doctors’ offices to display ads for weed products. Surprisingly, no movie distributors had ever purchased space to advertise their films, so I figured that this would be a fantastic platform to capture this audience.

“Think about it, they’re in there to buy pot, and they’re sitting in the waiting room looking at a TV. If we put these stars on the screen in front of them doing the same thing that they’re on their way to do, they’re going to connect. Since the original trailer wouldn’t translate to the intended audience, we decided to re-cut the spot and create an upbeat, marijuana highlight reel that told the story in a more familiar way. The Hero has great reggae music in it, so we took cues from that vibe and played up the stoner buddy angle between Lee (Elliott) and Jeremy (Offerman).

“We expected that the video would also have life online, so we really wanted to make it as fun and relatable as possible. With more than enough material to work with, and Sam Elliott riffing a tagline for the strain ‘Platinum Cookies’ that was a breeze. Whoever the geneticist is behind that plant must be stoked!”

So there you have it. We’ve embedded the two trailers below so you can see the difference for yourself…