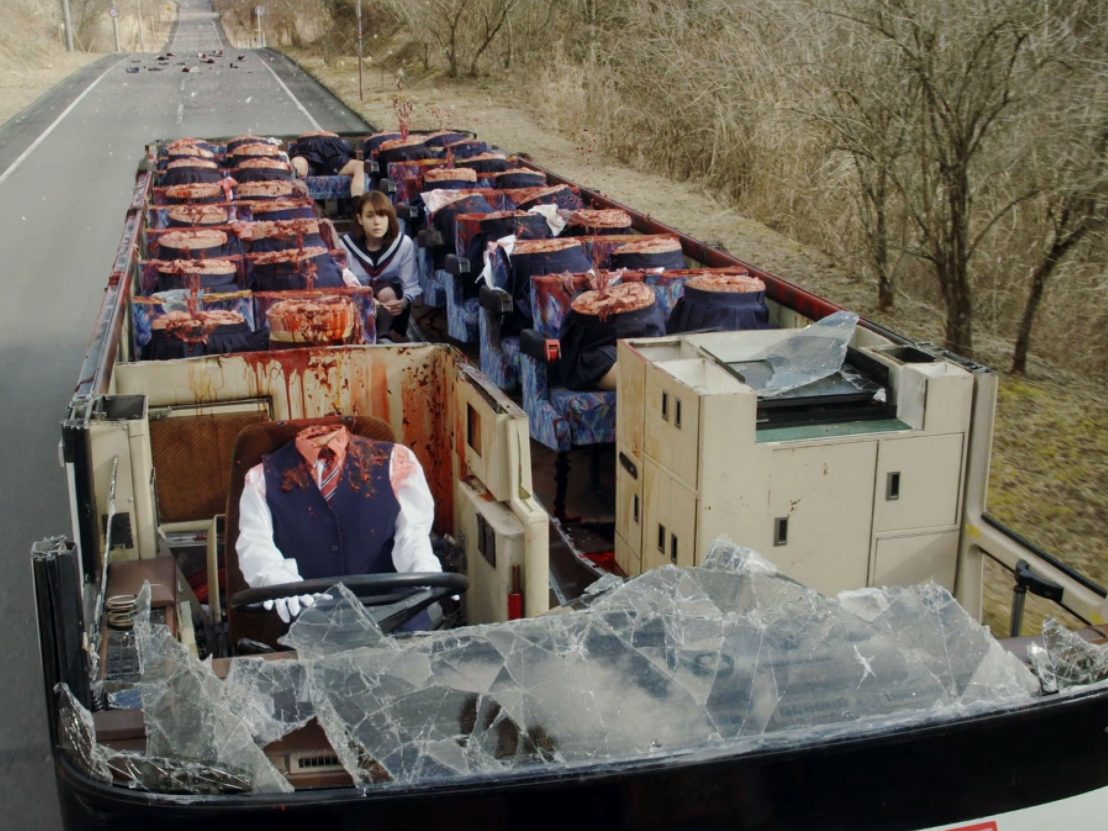 “Why did we have to run?” asks a schoolgirl, breathlessly, after she and three friends have just ditched class and raced full pelt all the way to a nearby river. It’s a good question. For while this particular act of running was an expression of joyous freedom and escapism, accompanied by an exhilarating musical soundtrack, Mitsuko (Reina Triendl) and her friends are always running in TAG, usually for their lives – and idyllic moments like this interlude on the river bank are just brief lulls in their lives, always overtaken by the relentless pursuit of chaos, destruction and bloody death.

TAG’s opening sequence, for example – which surely qualifies as one of the most arresting in film history – begins with an idealised scene: happy schoolgirls on a bus, heading off on a trip, blithely laughing and throwing pillows back and forth, as their female teacher comments on how “nice and sunny” it is. Yet as Mitsuko bends over to pick up her dropped pen, a supernatural force shears off half the bus, bloodily taking the heads and upper torsos of the other girls with it, and leaving Mitsuko covered in blood and fleeing what appears to be a leafy gust of wind (with its own Evil Dead-style shaky cam POV shot as it chases her down the road). Later, her lessons with best friends Aki (Yuki Sakurai), Taeko (Ari Hiraoko) and Sur (Ami Tomite) – short for ‘Surreal’ – will be brought to a violent end when the school’s teachers suddenly turn guns and grenade launchers on their student body.

Here youth is fleeting, and mortality is never more than a few steps behind – but even as death adopts irrational forms, the film itself deploys equally irrational transitions, always staying close to Mistuko while her locations and scenarios, even her identity, radically change, so that by the end she is also the 25-year-old bride Keiko (Moriko Shinode) and a long-distance runner named Izumi (Erina Mano). Confused and traumatised by her strange, wrenching experiences in a world inhabited exclusively by women (apart from a tuxedoed bridegroom wearing a pig’s head), Mitsuko is guided by the loyal Aki, who recurs in every storyline, to a climactic meeting with her maker, for whom she is a mere plaything.

Prolific cult filmmaker Sion Sono has freely adapted the world of Yusuke Yamada’s 2004 novel ‘Riaru Onigokko’ to expose the trappings of patriarchy. For as Mitsuko runs and runs, what she and her friends are struggling to escape is a closed system designed for the perverse whims of men, and gamed against the interests and independence of the female avatars it takes such pleasure in displaying, sexualising and – ultimately, repeatedly – slaying.

After much discoursing (mostly from Sur) on the clash of free will and determinism, Mistuko is gradually led to the best, perhaps the only, way out of this impossible predicament. It is a solution akin to what the Stoic Epictetus said of suicide (Discourses I.24.20): “Remember that the door is open. Don’t be more cowardly than children, but just as they say, when the game is no longer fun for them, ‘I won’t play any more,’ you too, when things seem that way to you, say, ‘I won’t play any more,’ and leave, but if you remain, don’t complain.”

Disempowered, and passively complicit in the suffering of her many sisters, Mitsuko finds that there is only one truly free choice remaining to her – and in exercising it, three times, she brings the whole game to an end. The very last time we see Mitsuko, she is running off once more, but to where, and to what, we no longer know.

TAG is released on dual-format Blu-ray/DVD by Eureka Entertainment on 20 November 2017.