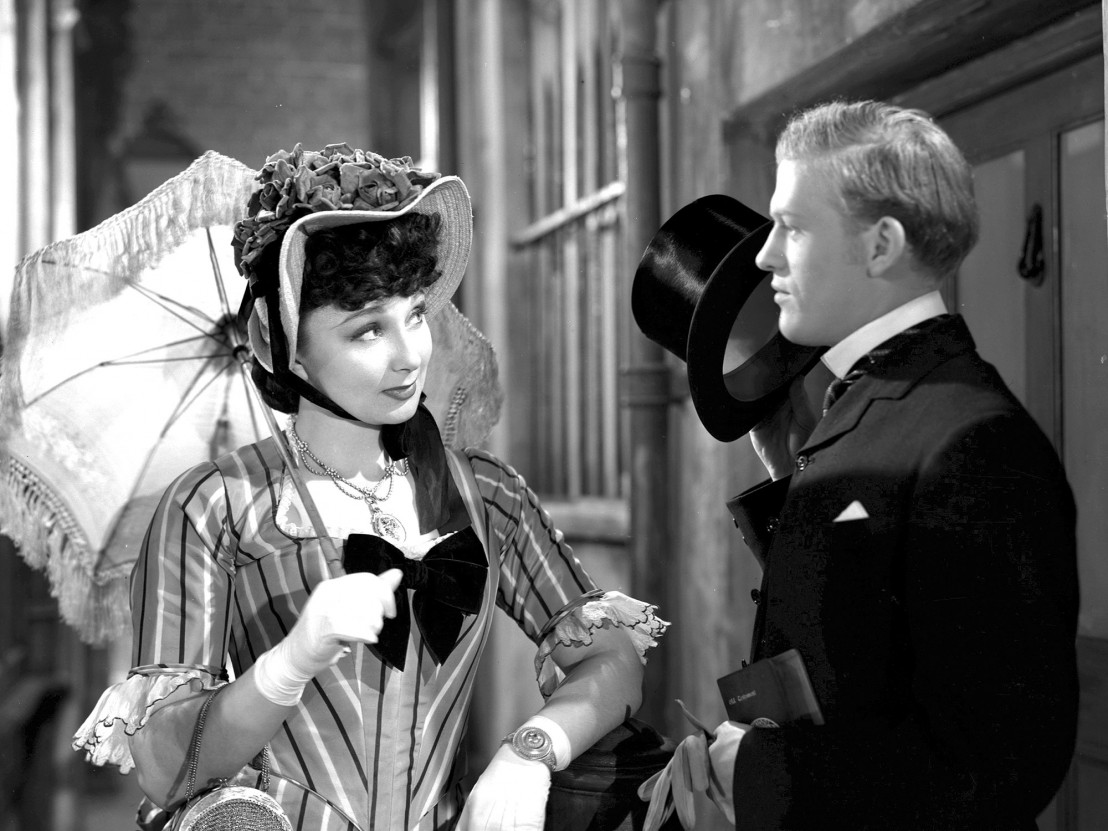 Released in 1945, Pink String and Sealing Wax is landlocked between iconic American noirs Double Indemnity, Laura and The Big Sleep. Produced by Ealing Studios and directed by Robert Hamer (who went on to make Kind Heart and Coronets), the film failed to have quite the same cultural impact as the studio’s most enduring classics. Yet it contains perhaps the most complex and interesting femme fatale in film history: Googie Withers’ Pearl Bond.

After initially appearing as a supporting character in a seedy subplot about a married woman’s infatuation with another man, it soon emerges that Bond is the film’s tragic villain. A strong-willed woman with murderous intentions, she is ruthless in her determination to plot her publican husband’s death following an abusive relationship. However, despite the cunning she displays in staging a murder as death by natural causes, Bond is vulnerable to the manipulating man she kills to be with. Above all, Withers’ anti-heroine is a desperate and lustful woman who subverts the traditional image of the femme fatale while adhering to the archetypal characteristics of the dark, seductive beauty.

Withers worked across stage and screen during the early part of her career, collaborating with the likes of Alfred Hitchcock (The Lady Vanishes) and Michael Powell (The Girl in the Crowd, The Love Test, One of Our Aircraft is Missing). Her first film with Powell was an unexpected opportunity that saw her excel in a lead role. Prior to Pink String and Sealing Wax, Withers starred in Ealing horror anthology Dead of Night, again for Hamer, before teaming up with the director on 1947’s It Always Rains on Sundays. On stage she appeared in plays by Anton Chekov and Oscar Wilde, working in Britain, Australia and on American Broadway. And in 1950 she starred alongside Gene Tierney, another brilliant leading lady from Hollywood’s Golden Age, in Jules Dassin’s Night and the City. It marked the union of two actresses playing different yet equally memorable femme fatales, with Withers continuing to show a penchant for playing darker characters.

What Withers brought to Pearl Bond was a natural ability to switch between light and dark, and she is arguably at her most compelling in the film’s many moments of quiet angst. Femme fatales are traditionally a source of mystique yet Bond’s terrible crime plays out in plain sight, linking her to Barbara Stanwyck’s devious Phyllis Dietrichson from Double Indemnity, who conspires openly with insurance salesman Walter Neff (Fred MacMurray) to murder her husband. But while the openness of Bond’s crime and attempted blackmail creates a certain connection with her contemporaries, it also sets her apart.

Double Indemnity and The Lady From Shanghai both end with the demise of Stanwyck and Rita Hayworth’s characters as they make one last calculating bid to survive with the sound of gunfire ringing around them. Laura concludes with a declaration of love from a dying man. By contrast, the most revealing aspect of Withers’ femme fatale is her final act of surrender, as she throws herself to her death from the promenade. Pearl Bond ultimately lacks the calm rationality of her counterparts. She is by turns dangerous and vulnerable, a victim of domestic abuse who tries and struggles to manipulate those around her – a truly unique and underappreciated femme fatale.

Pink String and Sealing Wax is out now on DVD courtesy of StudioCanal.