Discover the primal thrills of this prehistoric B-movie

Dinosaurs are well and good, but One Million Years BC proves it is sex that really sells. 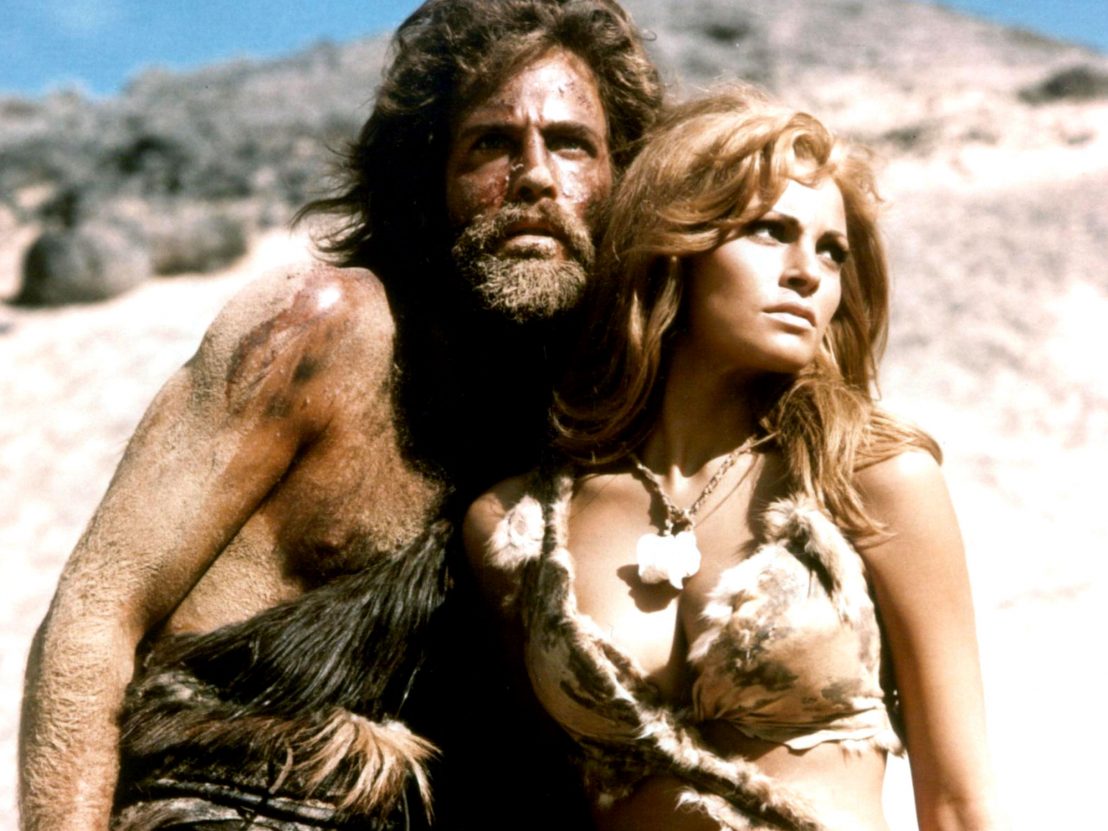 “This is a story of long, long ago, when the world was just beginning,” states a voiceover at the start of One Million Years BC. The initial darkness of the screen is invaded by a series of psychedelic images (colour-lit vapour and clouds, rapidly moving stars) suggesting the beginning not just of the world, but of the cosmos. “A world early in the morning of time – a hard unfriendly world,” continues the voiceover, “Creatures who sit and wait, creatures who must kill to live – and man, superior to the creatures only in his cunning…”

Don Chaffey’s film may be backward looking, both in its prehistoric setting and in its status as a remake of Hal Roach’s One Million BC from 1940, but it also anticipates the ‘Dawn of Man’ sequence in Stanley Kubrick’s 2001: A Space Odyssey (released two years later in 1968) and even the opening scroll of George Lucas’ Star Wars. Indeed, although One Million Years BC is ostensibly concerned with the atavistic anthropology that has allowed us to evolve (or not) into who we are today, it is closer to science fiction – or to the fantasy world of Skull Island in King Kong – than to any kind of historical reconstruction. Dinosaurs became extinct 66 million years BCE, which was a good 65-and-half million years before Homo sapiens first appeared – and yet here we see them existing and fighting together, alongside gigantic spiders straight from Jack Arnold’s Tarantula or The Incredible Shrinking Man rather than from any geological record.

Chaffey’s film is a saga of fraternal strife, in which we follow Tumak (John Richardson) – brother of the jealously ambitious (and rape-happy) Sakana (Percy Herbert) and son of the rugged Rock people’s brutal chieftain Akhoba (Robert Brown) – as he finds himself exiled and forced to expand his own narrow boundaries. Tumak stumbles upon the Shell tribe – more advanced, fairer-haired folk who have developed sewing and weapon-making skills, and adopted communal values of cooperation, compassion and clemency.

Despite having the brunette admirer Nupondi (Martine Beswick) back home in the rocks, Tumak is quick to realise that gentle(cave)men prefer blondes – and beach babe Loana (Raquel Welch) is likewise drawn to Tumak’s hardiness and individual bravery. If Welch’s first line in the film, “Ooh da la”, sounds a bit like “Ooh là là”, that is because her fur-bikini-clad body, prominent on publicity posters (and subsequently a best-selling pin-up), was the film’s unique selling point. Dinosaurs are well and good – especially when they are animated with the consummate art of Ray Harryhausen – but Hammer had long understood that it is sex that really sells. Film audiences, after all, still share the baser instincts of the primitives on screen.

If One Million Years BC is a tale of two tribes and their eventual miscegenation (figured – ooh da la – as a climactically erupting volcano), it is also a reminder of the primal drives – sex, violence – from which we never fully progress. There is in fact a third tribe here – a group of apelike savages living in a hidden cave located between the territories of the Rock and Shell peoples. These entirely bestial, barely characterised figures (not unlike the ‘crawlers’ from Neil Marshall’s The Descent) are presented as swarthy avatars of terror, in an uncomfortable reflection of more contemporary racial/colonial ideologies.

Make no mistake: One Million Years BC definitely privileges pale-skinned blondes as the torchbearers for civilisation. Perhaps more subversively, however, the similarities between these tribes – all troglodytic, all seen fighting in their separate caves for dominance over trophy possessions – are more striking than the differences, and we can see aspects of ourselves in all three groups. We may feel superior to the antediluvian creatures on the screen, we may imagine we live in a world of post-racial enlightenment – but then this is also the age of Trump, of Brexit, and of internecine strife little different from that portrayed in the film.

While the set-piece battles – whether beast-on-beast, beast-on-human or human-on-human – come with formulaic regularity, punctuating a flimsy, often cheesy plot with crowd-pleasing action and spectacle, these scenes also serve to underscore a world governed by endless cruelty and conflict, where everyone occupies their precarious place on the same food chain. One Million Years BC would make an interesting double-feature with Steve Oram’s neo-neanderthal satire Aaaaaaaah!, set not so very long, long ago, but covering similar primeval behaviours.

One Million Years BC is released via Studio Canal in a Limited Edition Steelbook Blu-ray on 19 December. The 50th anniversary restoration is also out now on Doubleplay.