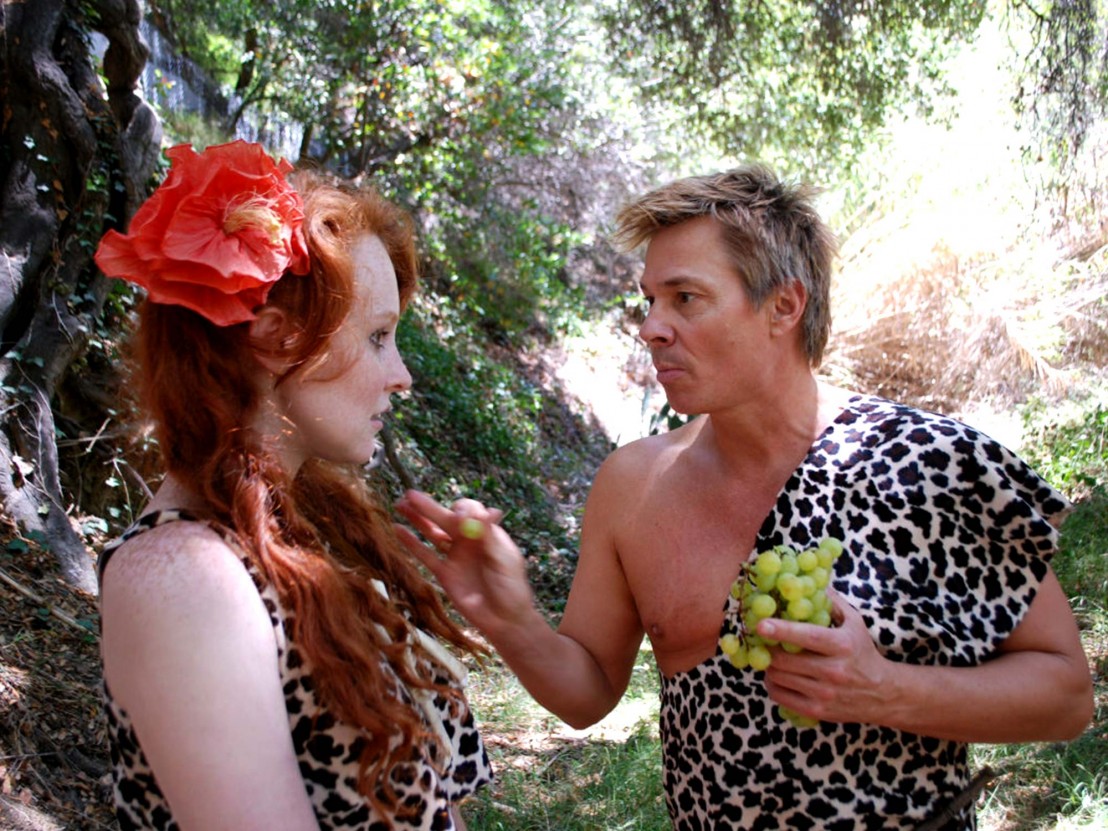 A Californian named Kansas Bowling, now 19, has made a movie called B.C. Butcher. This prehistoric slasher movie was shot on 16mm when she was 17 and and released through the independent production company, Troma Entertainment. “My friend Kenzie Givens and I wrote it in high school,” Bowling tells LWLies.“I was 15 and she was either 16 or 17. We just thought it was a funny idea and we both loved the same type of movies – Kenzie’s great love is John Waters. We weren’t setting out to achieve anything at the time; it was just something fun to do after school. But once I graduated when I was 16, I decided I actually wanted to make the film!”

The movie is 51 minutes of joyous, camp, gory theatrics. Five cave women clad in fashionably skimpy leopard print garments try to survive first the fits of their jealous valley-girl accented leader, Neandra, and then the murderous stalking of a heartbroken he-man. The flirtatious cave man Rex is at the root of everyone’s problems! This giggly blondie is supposed to be Neandra’s boyfriend but plays away with reckless glee.

The film begins with Neandra spearing a love-rival whose entrails emerge gloopily in a hue of radioactive red. The filmmaker’s younger sister, Parker Love Bowling, has a small role bookending the movie. Kansas expresses fierce pride and determination to continue collaborating when her sister comes up: “Parker Love Bowling will be in all of my films. In fact, I wrote her a starring role in one of my future projects.”

Bowling Snr has a lot of fun with B.C. Butcher, making every second riotous via upbeat swing tracks and performances that are all on a plane of intentionally heightened hamminess. Her style and tone owes a debt to Troma movies, which have influenced and inspired her since she discovered them at the age of 12. “Troma’s films are so beyond what any other production company brings forward. I’m a huge fan of Crown International Pictures, American International Pictures, New World Pictures, etc, but Troma’s films are by far the most bizarre and the most outrageous. Their films are ridiculous fun but what really stands out about Troma is their undying love for independent cinema. They care more about artistry and about their filmmakers than any other company around.”

Prior to B.C. Butcher, this writer had never watched a Troma movie and so turned to Wil Jones, a writer and programmer full of cult movie knowledge. According to him, the trademarks of Troma are: “really cheap, rubbery, crap gore; nudity; childishness; stupidness; cheapness; reusing props and stock footage; ludicrous high concepts (Surf Nazis Must Die). They’re trying to make bad moves ‘on purpose’. Lloyd Kaufman is also really important. He’s the studio head, producer and sometimes director. He’s probably more famous than most of his films. He’s a total shill, attention seeking, shameless but kind of loveable.”

More digging revealed that acting luminaries such as Kevin Costner, Samuel L Jackson and Marisa Tomei have appeared in Troma movies. Trey Parker of South Park fame directed one: Cannibal! The Musical and James Gunn, director of massive, superhero event movie, Guardians of the Galaxy once upon a time wrote the script for Tromeo and Juliet touted as ‘From the writer of The Merchant of Venice, from the directed of The Toxic Avenger.’

The Toxic Avenger is about a bullied nerd who falls into radioactive goo and becomes a deformed hero who only kills bad people. It is directed by Lloyd Kaufman and appears to be the definitive Troma movie, spawning three sequels and – bizarrely for such a wantonly violent flick – a kids TV show. The self-laceratingly hilarious way that Troma market their movies is a balm in the often intense world of movie-making. 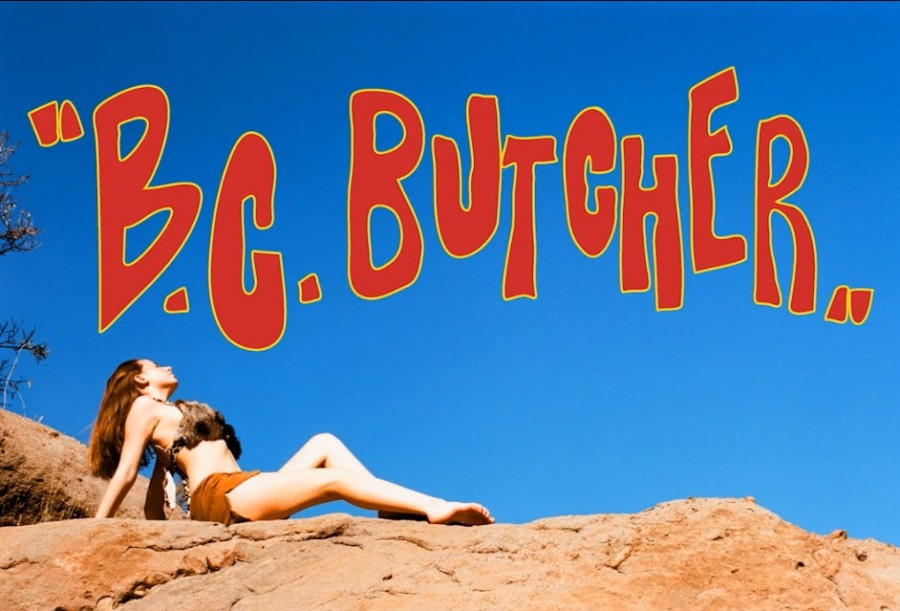 I discovered that I owned another Troma movie: Joel Reed’s 1976 horror comedy, Blood Sucking Freaks – originally (and more accurately titled) The Incredible Torture Show. The blurb said it was about a Theatre of the Macarbe run by a sadist named Sardu. Punters come to watch his shows not realising that the naked women they see being mutilated and killed on stage are having that happen for real. Most of the film unfolds backstage in the lair that Sardu and his dwarf assistant, Ralphus, have decked out with kidnapped, hypnotised naked women who they mistreat and kill for their sexual pleasure. It’s basically torture porn conceived for shock value with a flimsy narrative shoehorned in.

On the DVD extras filmed years later, Lloyd Kaufman vaguely admits that he wouldn’t have released such a film today. Bowling is in accord: “I can’t really condone Blood Sucking Freaks and neither do Lloyd Kaufman and Michael Herz really. They think it’s a horrible movie but became involved in restoring the film, which is a necessary job. You wouldn’t call whoever restored The Jazz Singer racist. It’s just about preserving history whether it’s on the right or wrong side of it.”

Granted that Blood Sucking Freaks seems to be an outlier in that most of Troma’s output seems to be defined more by schlocky gore and cheap effects than hardcore female exploitation. Still, women running around naked is a staple. This does not faze or outrage Bowing in the slightest: “I have absolutely no problem with nudity in film. Watching movies like these as a very young woman really helped me growing up. Being able to see what all of these different women looked like caused me never to be insecure about my own image and gave me a confidence that was rare in girls my age. I’d recommend a Lloyd Kaufman film to any teenage girl.”

Although, from my (outsider’s) position, Bowling appears to be marking out new feminist turf for the studio as a result of film action driven by clothed female characters, she is insistent that she is part of an established tradition, citing a glut of impressive Troma titles as forerunners: Ferocious Female Freedom Fighters, A Nymphoid Barbarian in Dinosaur Hell, Lust for Freedom, The Rowdy Girls, Squeeze Play, The Seduction of Dr Fugazzi, and Waitress! “I love movies with primarily female casts and Troma films like these are what helped me realise that. Boys are so boring to watch. My next film is going to have a 100 per cent female cast.”

As for the lack of nudity, her youth may have played a role in that creative decision: “I’m not against nudity but I just didn’t see it necessary in my film. Also, I’m not sure if it would even be legal for me to direct such a film at 17!”

She reveals a little snippet of information about her next film – the one with the all-female cast: “I don’t want to give away too many details, but it’ll be about teenage hitchhiking, rock ’n’ roll schoolgirls in Hollywood shot on Super 8. I haven’t discussed releasing it with Troma yet, but who knows. I definitely would not mind doing another film with them.”

Subscribe to Troma Now to stream B.C. Butcher as part of a January spotlight on women in Troma films. B.C. Butcher will be officially released in March on DVD and VOD.