Remember when Whoopi Goldberg experienced a rock’n’roll meltdown in this troubling action-comedy? 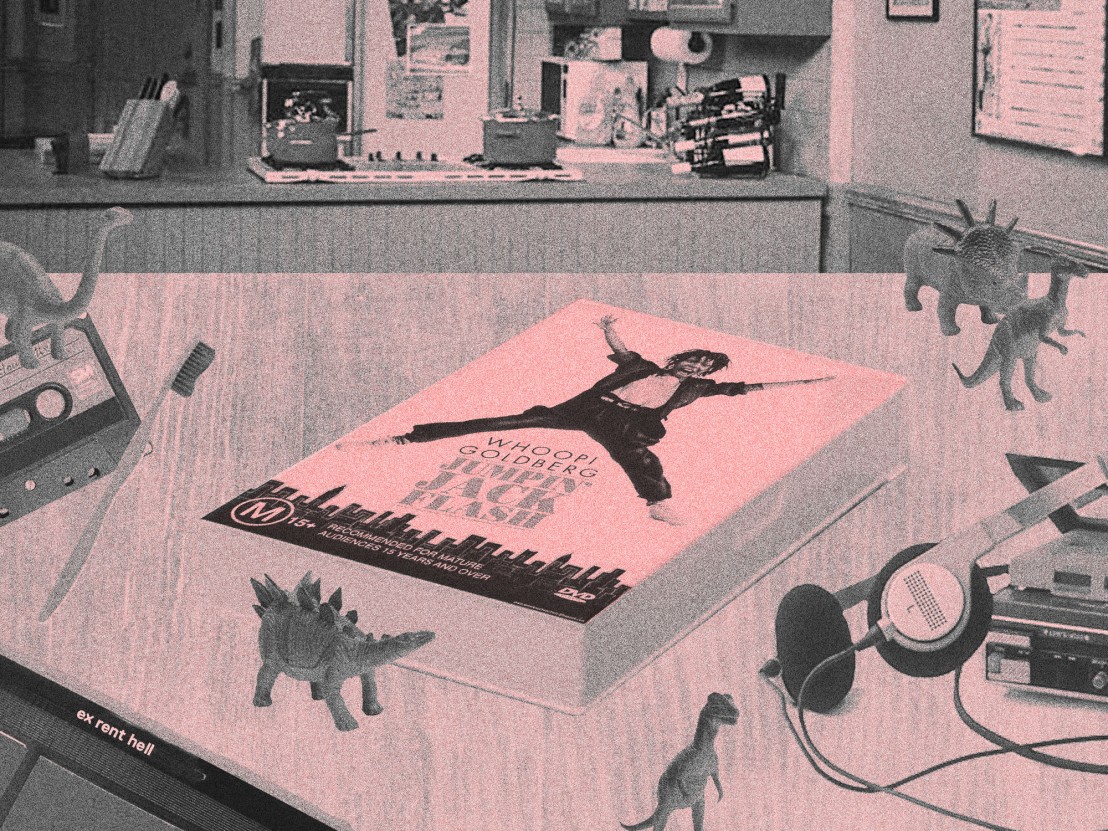 Tagline: ‘A man named Jack has got her Jumpin’ and the world may never be the same!’

“Some guy calling himself Jumping Jack Flash taps into my computer console and tells me I gotta go to his apartment, steal a frying pan and call Van Morrison…” Don’t worry, Whoopi – we’ve all had days like that. You accidentally get stuck chatting with the nutter on the bus. You leave your card in the machine. Your boss chews you out for coming to work smelling like “a brewery in a zoo”. Weekends sat on park benches waiting for the dim, cyan buzz of Monday morning to roll around. Finding yourself breaking into a stranger’s house and attempting to remotely communicate with rock stars through items of household cookwear. It happens.

Yes, it’s hard to be sane in the city, and the corrosive loneliness, breakneck pace and teetering social ladders of ’80s New York – the city that never sleeps, sobers-up or wipes its big shiny ass – have clearly overwhelmed the psychic defences of poor Whoopi Goldberg before Penny Marshall’s outwardly-comic study of the pathology of outsiderdom can get rolling.

A credit-sequence trawl through her apartment sets alarm bells to standby. Looking like the evidence room of the Sesame Street police station after an earthquake, the best you can say is that it contains a certain childlike vitality. Giant toothbrushes battle with gumball machines for what is clearly an unformed soul. But what is life without a little girlish eccentricity? No, her full break from reality occurs – as it does for so many of us – at work.

Not imagining for a second that it might be a prank by her snickering workmates, Whoopi charges into an extended proto-email exchange with the mysterious Jack Flash. After assiduously sifting through the lyrics to the films title-song for clues as to his identity (note: this consists of about twenty minutes of her rewinding a cassette tape), she eventually abandons this system in favour of an early-’80s technique known as “guessing” (another 15 mins). We are witnessing the first gloopy droplets of a total mental mudslide, the extent of which only becomes clear when her computer starts telling her what to do in the voice of Jonathan Pryce, he whose sanity-barrel disappeared so spectacularly over the falls at the end of 1985’s Brazil.

He instructs her to break into the British Consulate wearing in a Union Jack boob-tube and a Tina Turner fright wig, to attend strangers’ funerals dressed as “a baseball man” and to fight a Rabbi in a phone booth. One is strangely reminded of the reported antics of Lee Harvey Oswald in the weeks before President Kennedy’s assassination, ranting on street corners and ostentatiously visiting various foreign embassies. Similarly fractured, Whoopi is throwing herself from moving vehicles, harassing paraplegics, lobbying a Latino street gang to serve as their sexual piñata, all the while fantasising about killing Jim Belushi – the President of Pratfalls. And it’s a gas, gas, gas?

Just as lone nutbucket John Hinckley was inspired to take potshots at President Ronald Reagan by the film Taxi Driver, so it eventually dawns that Jumpin’ Jack Flash draws its wellspring of comic cues from the murder of John Lennon. The punishing repetition of the Rolling Stones track is surely intended as a minatory reference to Lennon-assassin Mark Chapman’s dark obsession with the Beatles song Revolution 9. Whoopi’s vain attempts to contact Van Morrison – another famously grumpy British rock aristocrat – are thus revealed to be the distorted projection of a mind unfit for the intricate turbulence of adult life – a theme director Marshall would follow to its macabre conclusion in her next film, Big.

When the real-life Jonathan Pryce is finally wheeled out in a bid to dampen Whoopi’s blunted fury, he looks very scared indeed. He has every reason to be.

This article was originally published in LWLies 60: the Eden issue.