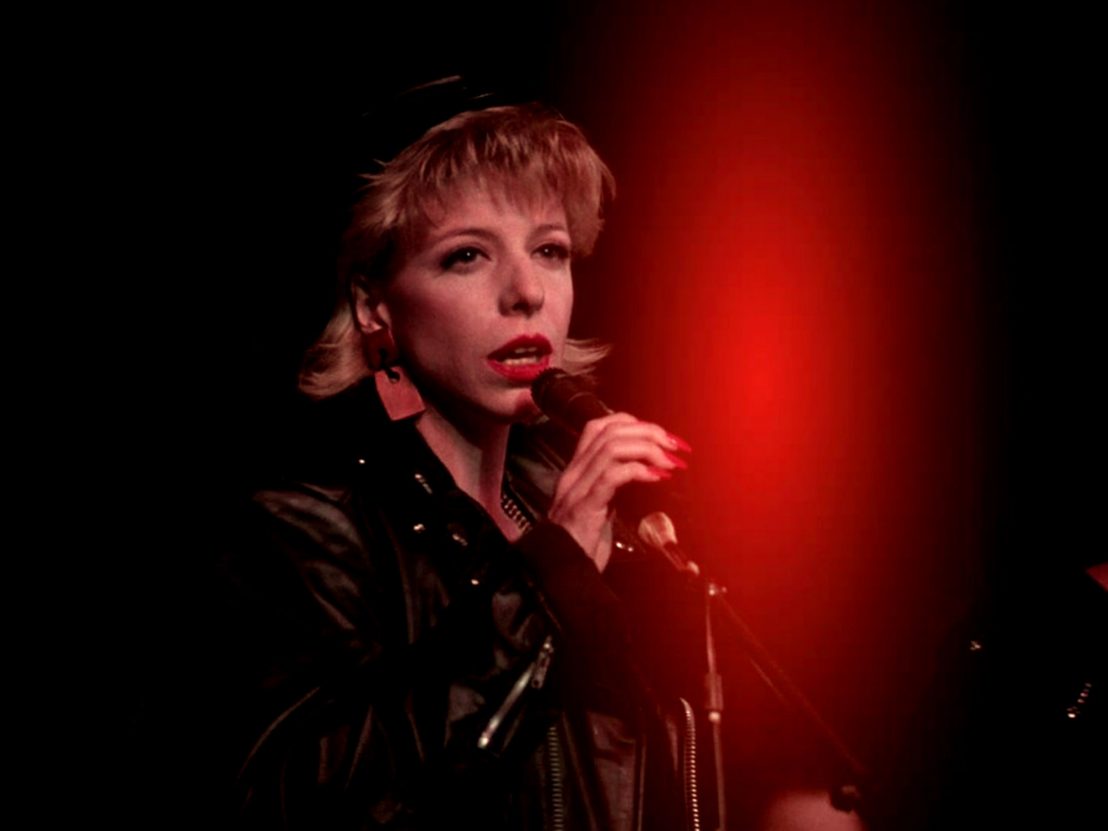 This article is drawn from a conversation between Tom Huddleston and David Jenkins that was conducted while listening to Julee Cruise’s album, ‘Floating into the Night’.

Julee Cruise’s album ‘Floating into the Night’, released in 1989, was produced by David Lynch and Angelo Badalamenti. All music by Angelo Badalamenti, all lyrics by David Lynch, all vocals by Julee Cruise. It comprises the songs that were used in the first series of Twin Peaks, plus ‘Mysteries of Love’ from Blue Velvet. It’s kind of the unofficial soundtrack to Twin Peaks, even though there was an official soundtrack to Twin Peaks, which somewhat overlaps.

I like the opening track, ‘Floating’. Twin Peaks has a slight 1940s wartime dance band kind of vibe to it. Also noir. And this song has a slight dance band-y wartime vibe to it. So that kind of works. There is a kind of pastiche-y vibe throughout the album, and there are songs I like a lot less later on because of it.

From what I understand, when David Lynch made Blue Velvet he wanted to use ‘Song to the Siren’, the Tim Buckley cover, by This Mortal Coil. At the time of Blue Velvet, he was the guy who had just come off the back of Dune and … he wasn’t who he was going to be a few years later. He certainly wasn’t a particularly well-known filmmaker at the time. Blue Velvet was the film that broke him. So, he asked Badalamenti to write a song that had the same mood and the same spirit as ‘Song to the Siren’, and to get a vocalist in. The vocalist they chose was Julee Cruise.

Blue Velvet was the first time Lynch and Badalamenti worked together, and David Lynch is one of those people who, if a collaboration works, he’ll continue that collaboration indefinitely. ‘Falling’ is the theme tune to Twin Peaks. It is iconic in the purest sense of the word. The version that appears over the credits doesn’t contain her vocals. But this version, the vocal version, charted in the UK. I suppose back then, you didn’t get TV themes with vocals. I remember being really shocked when Star Trek-bloody-Enterprise came along and it had that awful Russell Watson vocal performance over the opening credits.

Badalamenti is one of the few people who can get away with using synthesisers in such a blunt way, in such and obvious and strange way. Most people who use synthesisers make them sound cheap, but Badalamenti uses synths – and not very sophisticated synths – cautiously, and giving the sound some warmth. This is a spectacularly relaxing record. I can’t say the words “chill out” without thinking about Michael Caine or people lying around on big cushions in shady super clubs. It just is a really, really super calming record in the same way that Harry Nilsson’s ‘A Little Touch of Schmilsson in the Night’ is.

The way Badalmenti recorded her voice was with immense reverb. Huge amounts of reverb. But then a song like ‘I Remember’ has a really interesting breakdown in the middle of it. Badalamenti’s obviously a bit of a jazz guy so there’s a few sections on this record where things go off into slightly eerier territory. It should be noted that this is the first musical project that David Lynch was involved in, unless you count the soundtrack to Eraserhead, which is kind of musique concrète. He wrote all the lyrics. And it’s so David Lynch, you know. It’s so bluntly romantic and there’s no real shade, it’s up-front and emotionally simplistic, but in a kind of winning way.

The track ‘Rocking Back Inside my Heart’ is a bit too ‘pastiche’ for me. The really fake finger snaps I find annoying. This was the second single off the record, and it didn’t do as well as ‘Falling’. But the lyrics are great and also it reminds me of a particular scene in Twin Peaks where they’re in the Road House and Julee Cruise is on stage singing this song and Donna mouths the words to James. I always found that a little bit embarrassing. There’s something just a little bit over-clean about this track. It feels like kind of an attempt to write a particular kind of song as opposed to the other ones which are just sort of drifting. But then, it has a great mad sax solo. It’s a completely avant garde, weirdo sax solo that sounds like something from Faust or something, so you can’t really argue with that.

Cruise did a second album called ‘The Voice of Love’, again with Lynch and Badalamenti. I think Lynch was less involved. And it had ‘Questions in a World of Blue’ on it, from Fire Walk with Me and a vocal version of one of the songs from Wild at Heart, so it definitely had relations back to Twin Peaks, but it was less about that. It didn’t sell as well. It’s a good record, but not as striking as this one.

I find it hard to say how much of my love for this record is tied up with my love for Twin Peaks, because Twin Peaks is one of my favourite thing of all the things. We’re sitting here with a log signed by the Log Lady. Cruise made ‘Industrial Symphony No.1’ with David Lynch which was fucking wonderful. It’s a concert performance. I don’t know whether she’ll be involved in the new series. I think it would be really weird if she wasn’t, considering she’s still really got it as a vocalist. But then it’s really hard to say what the relationship between her and Lynch is. But yeah, ‘Industrial Symphony No.1: The Dream of the Broken Hearted’ is the concert film that Lynch directed of her and it’s this whole record plus a couple of others. And there’s people on stilts and kind of theatrical stuff, and it’s very, very cool indeed. It’s worth seeing. It’s awesome.

Regarding the new series, Lynch and Mark Frost have written the whole thing already and Lynch is directing the whole thing. I think it’s going to be really interesting. It may end up like Inland Empire with a kind of 15-hour freak-out with lots of Twin Peaks characters in it. I think Frost will pull him back from that eventuality. You do feel slightly like he’s lost interest. But then, yeah, I dunno. Where do you go after something like Inland Empire? That to me felt like a film made by someone who’d lost interest in storytelling for any kind of ordinary pleasurable reasons. I think it’ll be the last thing David Lynch makes. His final achievement.