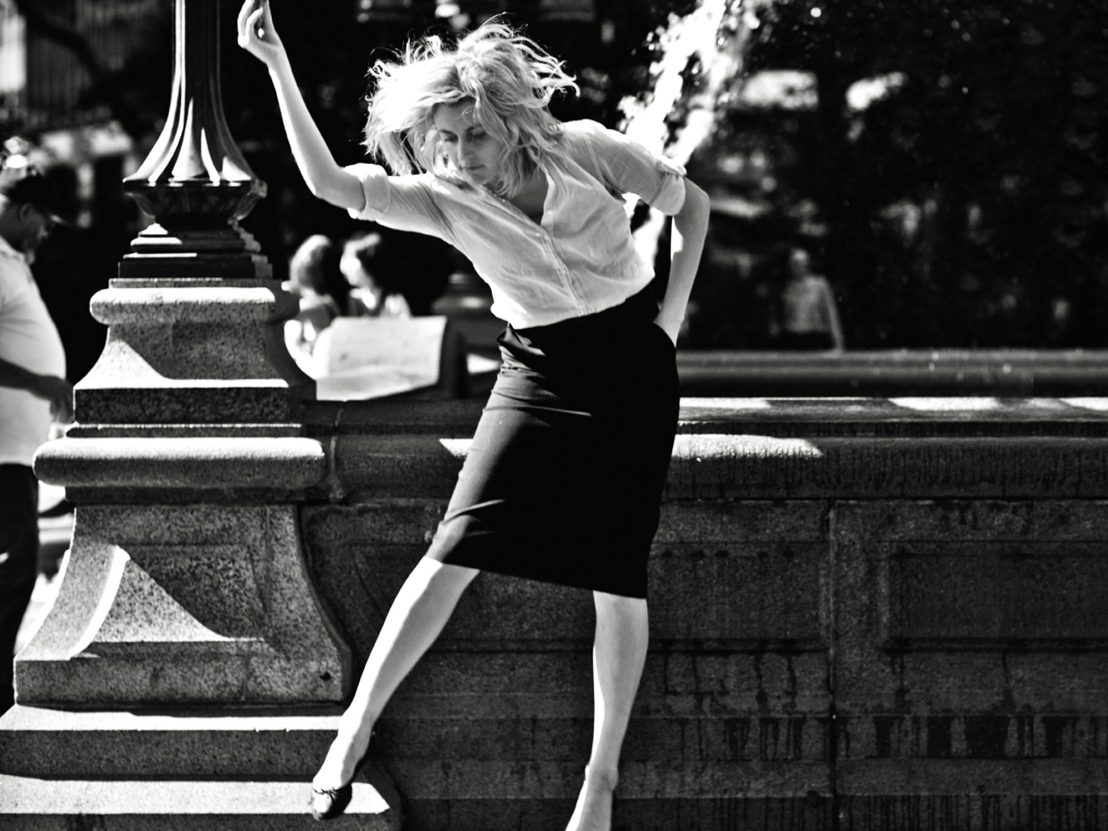 As far back as Greta Gerwig can remember, she’s always wanted to be a dancer. It started as a teen in Sacramento. The actor-turned-director was a diehard ballerina with ambitions of studying musical theatre at NYU. Even though she pirouetted into dialogue-driven movies, her childhood passion is still reflected in the Ginger Rogers wannabes she regularly plays. Pick a Gerwig role at random, and chances are you’ll find her jumping around to the stereo.

Best of all, there’s a DIY quality to Gerwig’s choreography. She may not be the most technically gifted dancer, but her moves are infectious, sincere and always in support of the character. She introduces Lola Kirke’s Tracy to New York’s nightlife in Mistress America (“That was really fun when we were dancing!”), and she rolls up to the club in support of a former flame in Eden. All without mentioning an aunt in Paris.

Gerwig’s upcoming directorial debut, Lady Bird, is being billed as a semi-autobiographical coming-of-ager set in Sacramento, so expect plenty of scenes of Saoirse Ronan discovering herself on the dance floor. With that in mind, here’s a handy guide on how you too can get down like Greta.

It’s sadly obvious why Frances remains an understudy: her moves are too rigid and unnatural. Away from the studio, though, she springs to life. Look at when she’s impressing cute boys on a whim (“Before you go, show us another dance!”) or practising mid-conversation headstands. Or, in a nod to Mauvais Sang, when she sprints and spins through New York to David Bowie’s ‘Modern Love’. It’s like dressing for the job you want – if you’re twirling 24/7, no one can deny you’re a dancer.

In the opening minutes of Mike Mills’ film, we see Gerwig pogoing around to Talking Heads in her bedroom, instantly making her the most likeable character. As a bonding exercise, Mills made the cast dance to songs their characters would adore. “Everyone felt foolish,” Gerwig has said of the experience, “but then it made everyone feel connected.” That explains why, later on, she compiles a mixtape for her adolescent pal; in a beautiful montage, they rock out to the cassette and he’s left understandably smitten.

Do the Sambola! In Whit Stillman’s screwball comedy, Gerwig enthuses that tap dancing can cure suicidal urges, but it’s her invention of the Sambola that truly brings people to their feet. As her eccentric character puts it: “Dance crazes enhance and elevate the human experience, bringing together millions of people in a joyous celebration.” Basically, it’s the offline version of going viral, and even the most uncoordinated can play along.

Dance like the whole world is watching you – Afterlife (2013)

The YouTube Music Awards may be a strange corporate cash-in, but it did give us a live music video with Gerwig leaping through corridors and miming to Arcade Fire in a forest. Despite her nervous persona, she’s a pro in the spotlight and it’s definitely her choreography – the air-punching, for instance, reappears in 20th Century Women. Director Spike Jonze described it as capturing “this sort of strange mix of melancholy and hurt and joy”. A perfect summation of Gerwig’s dance philosophy.

Dance like absolutely nobody is watching you – Maggie’s Plan (2016)

There’s often an emotional nakedness to Gerwig’s relationship with music, and it’s common that her characters only reveal their inner selves when they stop yapping and start dancing. In the standout scene of Maggie’s Plan from director Rebecca Miller, she privately slinks along to The Specials’ ‘A Message to You, Rudy’ in her kitchen while Travis Fimmel masturbates in the bathroom. A minute later, she freezes in horror when he walks in on her mid-swing. Somehow, that scenario is more embarrassing.

Much of Alice Bagnall’s will-they-won’t-they drama scrutinises the awkward tension between Gerwig and Olly Alexander, with both too afraid to confess any romantic feelings. That all changes when Alexander perches at the piano and Gerwig adjusts her body to whatever tune he’s playing. It all goes nicely enough until she kicks off her shoes and socks; suddenly, each gesture is wrought with emotion and she opens up her mumblecore soul. All it took was going footloose

What is so endearing about Gerwig’s drunken dancing in Greenberg is that it’s to Paul McCartney’s ‘Uncle Albert’. Half-crying and preparing for a hospital visit, she’s found her comfort song – so what if it’s an annoying novelty track? In contrast to Ben Stiller’s inertia, it’s Gerwig – young, animated, unashamed of her McCartney fandom – who sings in clubs and displays ambitions, and yet she too is weighed down by sadness. In 30 seconds of dancing, she says more about herself than most characters do in an entire film.