Yasuzô Masumura’s Giants and Toys from 1958, about rival confectionary companies, shows a nation in flux. 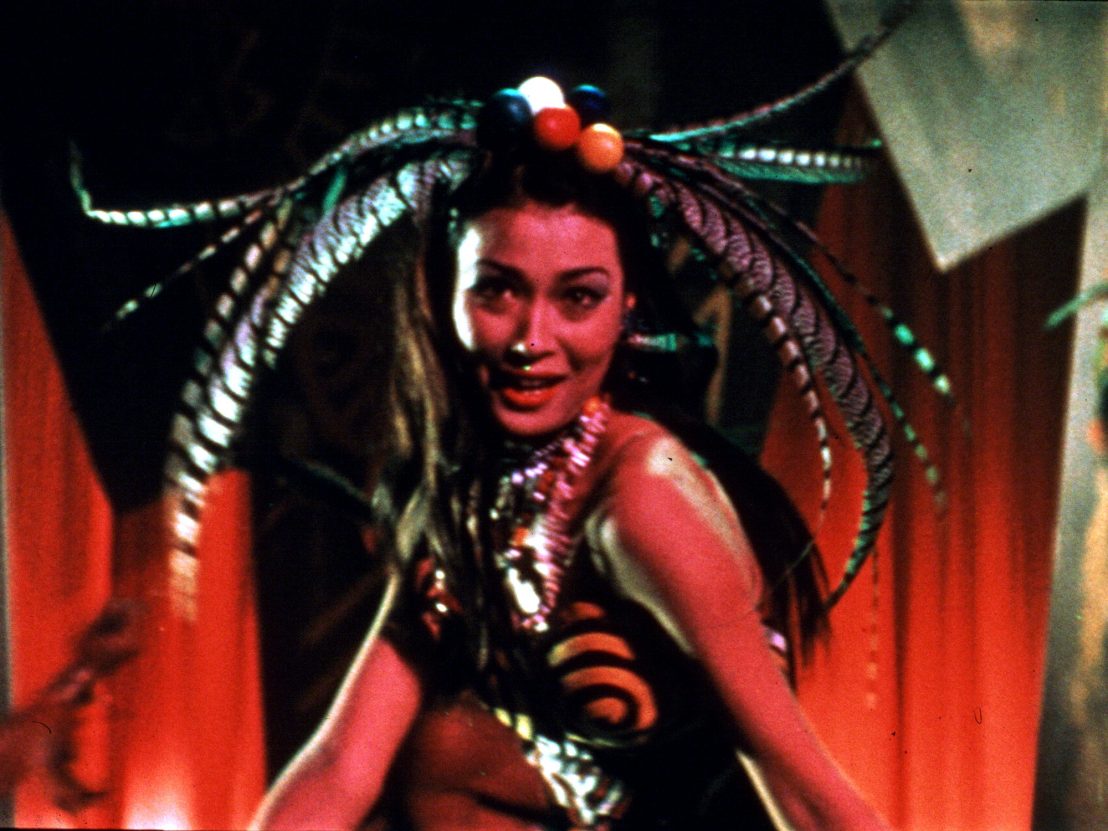 At the beginning of Yasuzo Masumura’s Giants and Toys, an adolescent working-class woman named Kyoko (Hitomi Nozoe) stretches and smiles, exposing her crooked, rotten teeth. And then her image freezes and is reproduced in monochrome miniatures that form a tile pattern across the screen, like a suite of early Andy Warhol silkscreens.

What we are witnessing here is an ordinary girl being elevated to art, and also being commodified, as part of the packaging to sell caramels. This is the same world of advertising that was explored the year before in Frank Tashlin’s Will Success Spoil Rock Hunter?, a world where image is everything, and where authenticity is manipulated, mass-produced and marketed.

After a title sequence, we see Nishi (Hiroshi Kawaguchi), undistinguished but for his centrality in the shot, walking in a sea of other suited salarymen all headed into work – “A flood of humanity!”, as the CEO of World comments, watching from high up in his office as he holds a meeting with his head of advertising, Yashiro (Kinzo Shin), and Yashiro’s son-in-law Goda (Hideo Takamatsu). Much as Goda has married into his executive position, and will soon, through sheer ambition, drive and cunning, displace his anxious, outmoded father-in-law, so too Kyoko and Nishi are about to be rapidly raised above their station in the changing Japan of the 1950s, where the old models of class and bloodline, and the ethics of bushido, are fast going out of fashion.

This may be the postwar era, but World is engaged in a brutal ongoing war with arch-rivals Giant and Apollo to secure the largest piece of Japan’s highly competitive confectionery market. As he develops World’s latest campaign, Goda recruits Nishi from the advertising pool to be his personal assistant, as well as his occasional spy. Nishi uses his old college connections to try to ascertain what the other two firms are planning, while Goda scouts Kyoko in a cafe, and is able to see past her ugliness to a fresh proletarian look which, if properly managed, could be the new popular face for their line of caramel sweets. Nishi is also expected to serve as Romeo to Kyoko – whom he cannot stand – ensuring her continued allegiance to World.

Yet as all of these characters crawl their way to the top, we can see their fall inscribed in their rise. If Goda exploits Kyoko for her saleable genuineness, transforming her into a star with help from sleazy, cynical photographer Harukawa (Yunosuke Ito), he also creates from her a Frankenstein’s monster whom he is soon no longer able to control, and whose constructed artifice, undermining her authenticity, will also eventually be her downfall. And in case the point is missed, Kyoko’s now sidelined predecessor as ‘face of the moment’ tails her like a ghost, embodying the fate of failure that inevitably awaits Kyoko too.

Meanwhile, erstwhile ‘publicity demon’ Yashihiro, in post for being the CEO’s cousin, has fallen behind the times, and is now reduced by the constant pressures of the workplace to crippling dyspepsia and other ailments. When Yashihiro’s now more talented son-in-law Goda takes over, the campaign may shift in a more modern direction (featuring imagery and toys from the space age), but Goda too soon succumbs to the stresses of the job, dangerously mixing uppers and downers, and eventually – in an act both literal and symbolic – coughing blood all over his actual letter of promotion.

Adopted as Goda’s protégé within a week of starting at World, Nishi may belie the principle, articulated by a colleague, that “if you aren’t a relative, you’ll never get on”, but nonetheless he comes to regard his heightened position as more trap than triumph, in a system where everyone is both enslaved to the bottom line and forced to fight a treacherous, dishonourable war (against each other and against time itself) that can never be won.

Adapted by Yoshio Shirasaka from a short story by Takeshi Kaiko, Giants and Toys focuses – like TV’s Mad Men avant la lettre – on advertising as a way to explore a nation’s changing self-image in changing times. As the culture of the recent American occupiers becomes a dominant local influence, as television arrives, as new-fangled plastic materials appear and as the moral values inherited from the samurai era are phased out (“We aren’t living in feudal times anymore,” Goda tells Yashiro), Masumura’s film uses its plot about rival confectionery companies to anatomise Japan’s profound metamorphosis.

Among all these characters being swept along until they are wiped out by the endless waves of progress, Kyoko proves an adept creature of transformation (more so than the outsized, stunted tadpoles that she keeps as pets), and she alone is left by the film at her peak, before being overwhelmed. But her arc traces the fickle nature of celebrity, and ultimately even she seems aware that she is merely along for a fun, lucrative ride that will eventually come to a thudding stop. Accordingly this satire, despite its preoccupation with candy, comes with a decidedly bittersweet flavour which, if it makes you smile, might just also be rotting your teeth.

Giants and Toys is available for the first time anywhere in the world on HD Blu-ray with its original uncompressed Japanese mono audio, via Arrow Video from 10 May.