Watch Anne Hathaway control a Kaiju in the Colossal trailer

It’s still only January, but we’ve already got a glimpse of what could well be the weirdest film of 2017. The first trailer for Colossal shows Anne Hathaway discovering that she is somehow able to control the movements of an amphibious Kaiju-like creature that’s terrorising Seoul.

Directed by Spanish filmmaker Nacho Vigalando, the film is being billed as a self-aware, darkly comic take on the well-trodden monster-invasion genre. Hathaway plays Gloria, a reckless, self-loathing drunk who is forced to return home to New Jersey after being chucked out by her boyfriend. Wasting her time boozing with an old high-school friend (Jason Sudeikis), Gloria soon comes to realise that her inebriated antics are being enacted on a terrifying scale by a giant monster on the other side of the world.

But the film isn’t all gleeful absurdity. It’s not a spoiler to note that the rampaging beast serves as a metaphor for the destructive nature of Gloria’s alcoholism. Judging by the tone of the trailer though, there’s no need to fear any heavy-handed moralising. As far as we can tell, Hathaway appears to relish playing a goofy screw-up, and with the recent news that she’s set to join the case of a Dirty Rotten Scoundrels remake, expect to see a lot more of the actor flexing her comedic muscles.

Colossal hits US screens on 7 April, and while there’s currently no UK release date, you can whet your appetite by reading our favourable first-look review in which we call the film an “original, bewildering and brazen rock ’em sock ’em comedy.” We’ve not had a decent one of those for a long while. 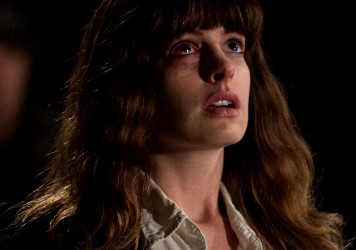