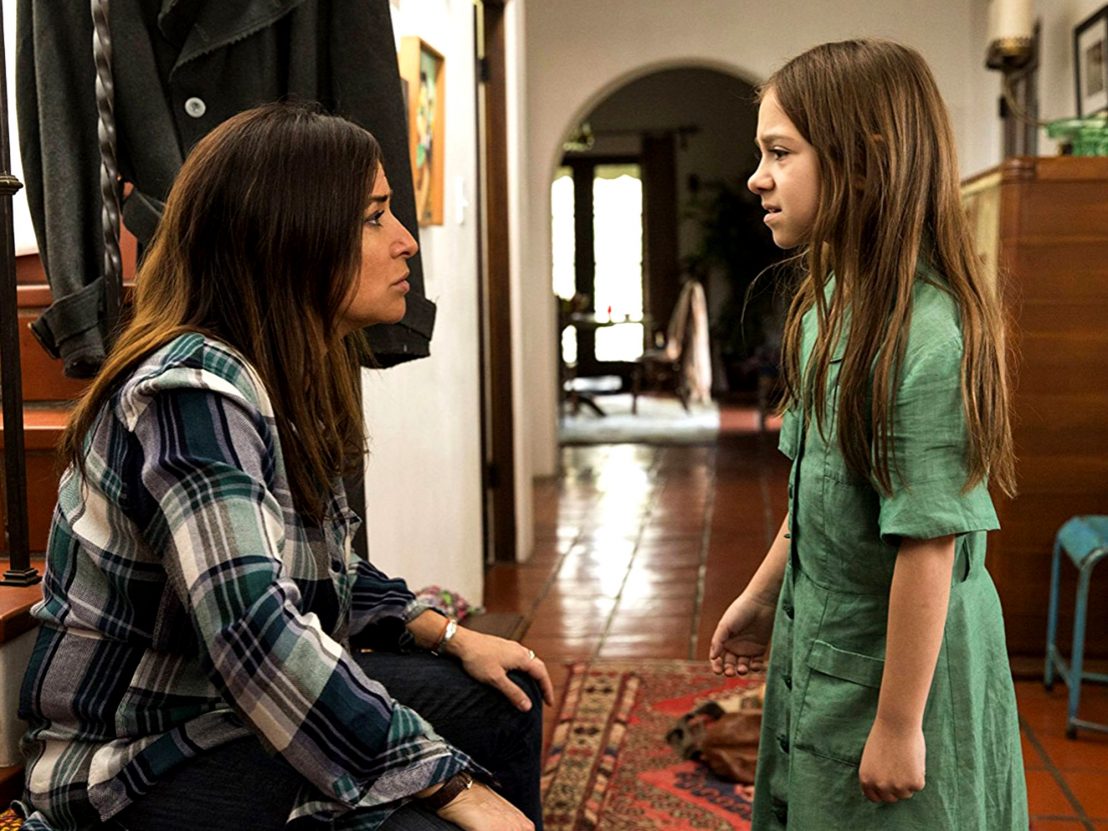 With the camera softly resting on Sam’s (Pamela Adlon) face for a good 30 seconds, we see her go through all the emotions a mother typically goes through on any given day: exhaustion, anger, sadness, disappointment, love, and, above all, the type of anxiety that nestles itself in your chest like a second layer of skin the minute you give birth to a tiny, helpless human being.

Sam’s tiny human beings may have grown into little people with their own minds and temperaments by now, but that doesn’t mean they need her any less. On the contrary – the more they fight for their own independence, the needier they become, especially her eldest, 16-year-old Max (Mikey Madison), who has decided to live out her mother’s worst nightmare by dating a “Spanish, world-travelling, many-diseased” guy in his thirties. There seems to be no escaping other people’s neediness, except for in those quiet moments spent on the toilet. Her sanctuary.

Opening to this intimately relatable motherhood moment, Sam sets us up for a superb second season of authentic storytelling and performances on Better Things’ second season. The show, which premiered in late 2016, fits into an exciting new genre of female-driven storytelling that explores family dynamics, and specifically motherhood (Catastrophe, Transparent), in a raw and truthful manner, without having to rely on forced comedy or grandiose plotlines to drive its sentiments, and our connection with its characters forward.

Better Things thrives on its unpretentious, a-typical-day-in-the-life-of format, and it is exactly this honest approach that makes it one of TV’s finest depictions of single motherhood and the complexity of mother-daughter relationships. Adlon, who directs every episode of season two, puts so much of her heart and soul into the show that it effectively becomes an extension of herself and her three daughters. Everything from the artwork in Sam’s house to the clothes her TV daughters wear comes from Adlon’s own home, lending the show an undeniably personal feel.

After Sam finally exits her tiled sanctuary in season two opener ‘September’, she rejoins the party she’s hosting, clearly unexcited by the prospects of having to engage in more small talk. Her daughters are all going through their varying stages of (pre-)puberty, her mother still hasn’t mastered the art of discretion, and her friends either volunteer well-meaning but unwanted advice, or act about as mature as her youngest kid, Duke (Olivia Edward). The need to escape her own house and the people in it is real, but it is a wish she cannot, and will not, grant herself.

Instead, she repeatedly composes herself with deep sighs and matching facial expressions, adamant to keep Max close, and her boyfriend Arturo (Arturo del Puerto) even closer, without attempting to control her like many other mothers would. Her parenting strategy may not be the right one, but it’s the best she can do, and at the end of the day, that’s what motherhood is all about – giving it your best.

‘September’, along with its apt soundtrack that includes George Cromarty’s ‘Little Children’ and The Blenders’ ‘Daughter, Daughter’, reveals just how difficult it is for a mother to find the right balance with a daughter that is, to quote Britney Spears (and yes, it hurts), “not a girl, not yet a woman”. It’s a painful, confusing period for both parties, but comfort can be found in Cromarty’s softly sung words, “there are so many things you try to skip, but who will be there in case you slip, at the end of the day?”. Because the person most likely to stop you from slipping, will be your mother. And if you’re lucky, it’s one like Sam.