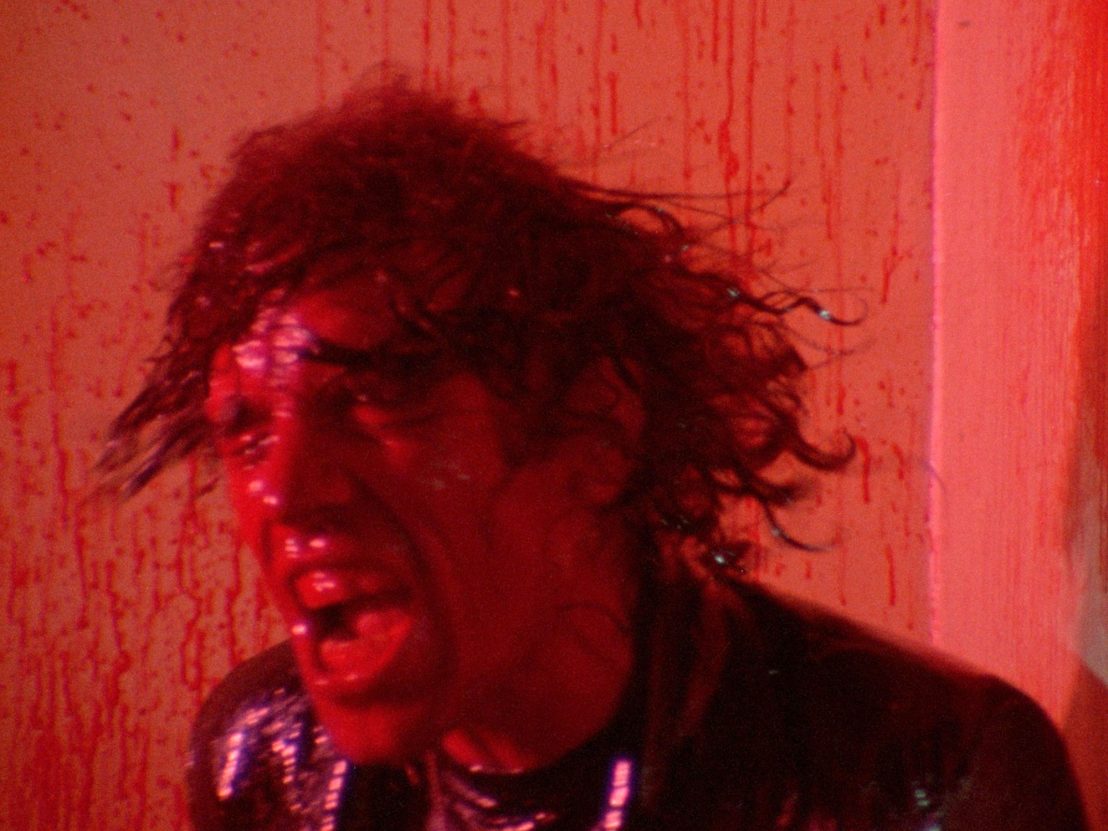 The title alone of Abel Ferrara’s The Driller Killer was enough to get it on the Video Nasties list, at a time when VHS copies of Samuel Fuller’s World War Two drama The Big Red One were briefly being seized by Manchester Police owing to someone’s (hilarious) misreading of that title. Or perhaps it was the lurid poster image – of a drill bit bloodily penetrating a man’s forehead – that seemed fully to confirm the promise of Ferrara’s title.

The film opens in disorienting fashion. In a church, after being confronted with a red-lit crucifix, Reno approaches an old, long-bearded man who touches his hand. Reno flees in terror with his girlfriend Carol (Carolyn Marz) to a New York cab, where we learn that the old man, a complete stranger, had a piece of paper in his pocket with Reno’s name and number written on it. “The nun said it could have been a relative or something,” Carol comments, “You never knew your father…” – but Reno insists that the man was merely “some fucking degenerate bum wino.”

It’s a mysterious opening, revealing Reno’s rootlessness while also framing his crisis of identity in overtly religious terms. Significantly, most of Reno’s victims will not be the nubile co-eds that typically die in slashers, but rather the homeless, dipsomaniac, mad males who were then populating New York’s sidewalks and alleys (a visible newspaper headline in the film reads: “State abandons mentally ill to city’s streets”). When Reno kills these marginalised men, by thematic association he is also lashing out against his absent father, against God, and against himself.

Reno is also a struggling, impoverished artist. Living in an apartment on Union Square (where Ferrara also lived at the time) with Carol and her sometime girlfriend Pamela (Baybi Day) and faced with mounting bills and an eviction notice, he works sporadically on his latest painting (of a blood-streaked buffalo), aware that if it fails to satisfy the gay art dealer Dalton Briggs (Harry Schultz), his ménage à trois will be turned out onto the streets – where Reno would not be so very different from the degenerate bum winos he so despises and fears.

Reno is surrounded by violence – not just the newspaper articles about deranged killers that Carol discusses, but also a stabbing in the park (the victim’s side, like Jesus’, pierced) that Reno witnesses himself. He is a man under a lot of pressure – and perhaps the final straw is when No Wave band The Roosters – with their gender-bending singer Tony Coca-Cola (DA Metrov, credited as Rhodey Montreal, and practically playing himself) move into the apartment downstairs and rehearse all day and night long.

So sure, The Driller Killer is a slasher in which a troubled man cracks under immense pressure and gives vent to his rage in a murder spree – but it is also all at once a (self-reflexive) portrait of an artist whose creative temperament is realised as a sort of passion play, and a scuzzy, street-level panorama of contemporary Bowery Bohemianism. These admixtures of high and low, of sublime art and gutter trash, of soaring creativity and filthy lucre, are underscored by a soundtrack that juxtaposes Joseph Delia’s electronic covers of Bach to the Roosters’ raucous punk. It is a thematically dense, messily grounded film which, although about a drill, never bores – and there is nothing else quite like it.

The Driller Killer is released by Arrow Video on Dual-Format DVD/Blu-ray on 28 November.