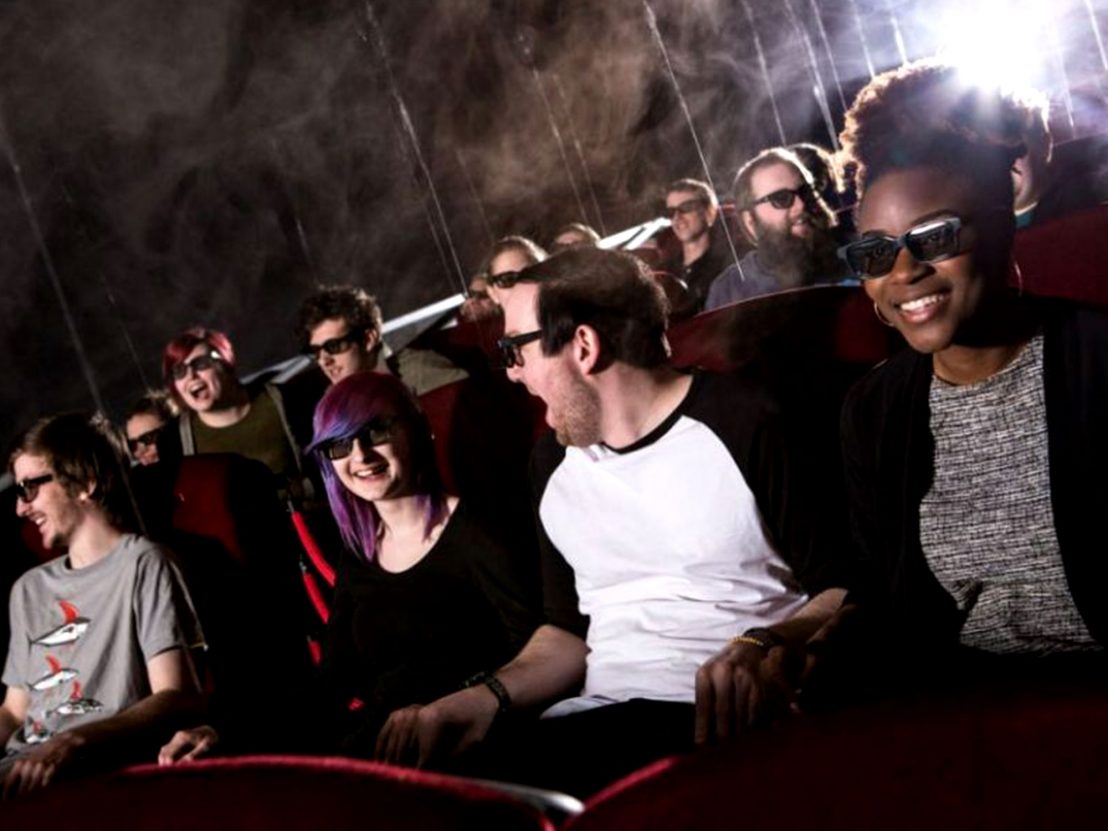 Ever since the invention of photography, the technology of representation has been involved in a seemingly unstoppable movement towards an ever greater realism. Despite some impulses of abstraction and artificiality, progress in the visual arts has been defined by and large by how faithful man-made images can be to reality.

From drawings and paintings to photographs, from still to moving images, from black-and-white to colour, from 2D to 3D, it is as though the human race, in its maddening desire for power and control, also sought to capture and recreate reality itself. From there, it does not take a genius or a degree in Film Studies to see in this inclination some attempt to challenge the ultimate creator, God.

The latest playground for such philosophical musings is none other than the Cineworld in Wandsworth, London, one of the many multiplexes of a cinema chain specialising in big-budget American blockbusters. What distinguishes this branch from the others is the installation late last year of a special screen equipped with the motion seats and special effects already familiar from amusement parks.

In coordination with the action on screen, seats move back and and forth or sideways, while tiny air jets installed next to the headrests give the sensation of a bullet flying past. Wind turbines match a feeling of speed to the characters’ rapid movement on screen, or recreate the sensation of a storm, accompanied by bright flashes of light and water falling from the ceiling with various levels of intensity. Specific smells can even emanate from the seats, while tiny tubes by the feet can give ankles the tickling sensation of walking through a field, or the terrifying impression of having almost stepped on a snake.

Although the apparatus seems to me way superior to what I last experienced at Disneyland, the innovation here is not so much the technology but its application. Created by CJ CGV, the number one cinema chain in Korea, ‘4DX’ technology does not bring motion seats and special effects to a fake train ride projected onto the screen, but to almost any of the latest American blockbusters on release. For example, at the Cineworld Wandsworth recently you could purchase tickets to see Alien: Covenant in 4DX 2D. Or rather not see it, but ‘be in the movie’.

This delightfully cheesy marketing slogan is actually quite accurate, as the technology does indeed aim to offer the most immersive cinema experience possible without the viewer having to be alone – as with virtual reality headsets – or to actually stand in the middle of a film set. Gone are the days when all movie sensations were mere emotions, summed up by flat images on a two dimensional screen. 4DX adds a physical dimension that was previously denied them by virtue of the very mechanism of cinema – the camera thus far only captured the look, not the feel(ing) of a place.

Like 3D and IMAX before it, 4DX was evidently introduced as a strategy to attract film viewers away from home and back into cinemas. If admissions have been dwindling ever since the days of the VHS, the ever-increasing catalogue of films available on streaming platforms, viewed on increasingly sophisticated home entertainment setups, has been making matters significantly worse. Incentives to pay the price of an often expensive cinema ticket are fewer and fewer.

4DX is simply the latest technology to offer audiences something they cannot get at home, turning a visit to the cinema into a real event. Looking at the numbers, it works. Launched in 2009 with the 4DX release of Journey to the Center of the Earth in Seoul, South Korea, the technology has been growing ever since and is now available in 45 countries.

Despite this success, 4DX has yet to resolve an issue that greatly impacts its enjoyment. While movies generally work to align spectatorial sympathies with one character over others, 4DX can confuse this process of identification, transcribing every physical contact in the film regardless of character allegiance.

Put simply, if the good guy hits the bad guy, the viewer will feel a hit in the back of their chair as if they were suddenly required to identify with the villain. This is all the more jarring in superhero movies, which often evolve in a black-and-white moral world and constitute most of the films screened with the technology. As such, 4DX viewers are not so much ‘in’ the movie as they ‘are’ the movie, experiencing all of the physical sensations that occur within its world.

This confusing configuration is largely due to the fact that no film has yet been made specifically for the 4DX technology. As of today, 4DX effects are not created by the film studio itself, but by a special team of editors working for CJ 4DPLEX, an affiliate of CJ CGV. This issue might soon be solved though, as the company is looking into making a film especially designed for 4DX screens.

In much the same way that certain directors craft their film with its 3D rendering in mind, 4DX directors would have to consider not only the visual aspect of their film but also its physical, ‘sensational’ dimension. A first step was taken just this year by James Gunn, who got personally involved in the creation of the 4DX effects for Guardians of the Galaxy Vol 2. And with Gravity director Alfonso Cuaron indicating his enthusiasm for the medium a few years ago already, it seems safe to expect a real 4DX picture very soon. Brace yourselves.